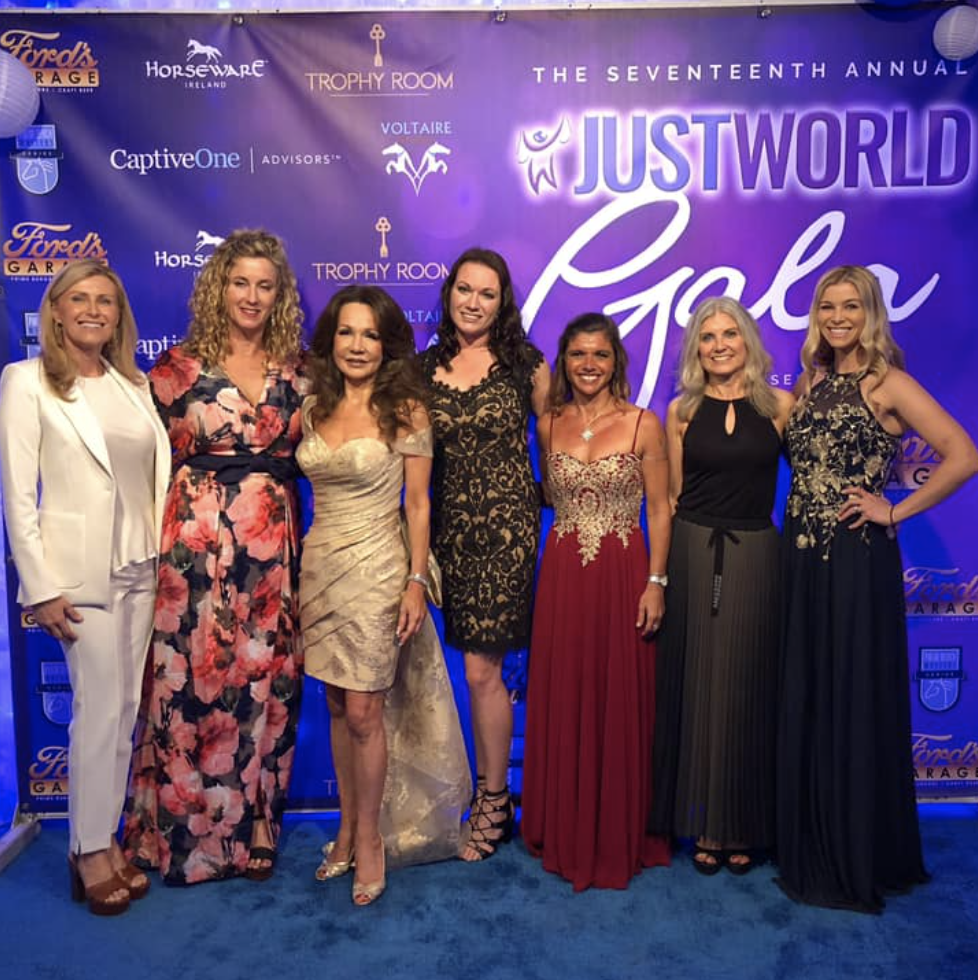 Nonprofit organization JustWorld International had another record-breaking crowd for the Seventeenth Annual JustWorld Gala, presented by Caryl Philips and Frank Zeiss and Ford’s Garage, hosted at Belle Herbe Farm on Friday, January 24, 2020. More than 750 guests came together to celebrate the organization’s seventeenth year of uniting the equestrian community in order to support and fund education and nutrition programs that empower thousands of children around the world.

Several special guests were in attendance and starting off the evening, Juan Pablo Romero Fuentes, founder of the JustWorld partner organization in Guatemala, took the stage for a solo acoustic performance. Pamela Buckman, Principal of Pioneer Park Elementary – the JustWorld partner organization in Belle Glade, Florida – and two first grade students joined Fuentes onstage and proudly read to the audience to highlight the JustWorld literacy program. It was a symbolic moment for the organization to showcase global leaders coming together to give students the tools to succeed academically and have access to greater opportunities.

To impress the impact JustWorld is making, the presenters shared significant benchmarks with guests. One of the most exciting announcements came from Mark Samuel who shared the update that JustWorld was chosen as an “Official Charity Partner” of the FEI, which will help the organization raise awareness and reach riders on a global scale.

Steven Wilde, Justin Paul, and Matt Harris emceed this year’s event and lead the “Call to Action” to raise funds to expand the reach of the education and nutrition programs the presenters described. In the last decade, close to 77,000 children have received the gift of education and in the past five years alone – 1.8 million meals have been served thanks to JustWorld and the supporters who stand behind the organization.

Wilde explained, “The work of JustWorld isn’t finished. We need to expand the reach to support more children in more countries.”

The JustWorld live auction was another major fundraising element, and showcased several once-in-a-lifetime experiences. Live auction features included a Longines World Cup Finals package, where winners will get to experience the world’s best jumping and dressage athletes in Las Vegas, April 15-19, 2020, as they vie for the prestigious title of Longines FEI Jumping World Cup™ and FEI Dressage World Cup™ Champions. Longines Global Champions Tour and The Global Champions League generously donated a VIP table for up to four guests in the exclusive hospitality lounge at the spectacular event in the iconic destination of Miami Beach, from April 2-4 2020. Gala guests also had the chance to bid on a special opportunity to train with the number one world-ranked show jumping rider, Martin Fuchs, during the 2020 Winter Equestrian Festival season. Bubbles, a mini pony donated by the Peeps Foundation, was also a crowd favorite. However, the highlight of the evening took place when Kevin Babington offered to auction off a clinic in support of JustWorld. Auctioneers sold the clinic twice, raising funds for the Kevin Babington Foundation as well as the children served at JustWorld programs.

The silent auction featured more than 100 fabulous items, ranging from beautiful jewelry pieces – including elegant Longines watches – to amazing equestrian packages, such as a painted art saddle, donated by Voltaire Design and created by artist Meghan Bacso. There were also incredible experiences, including skydiving for two, a Yellowstone stay, a Boston Bruins VIP experience, and golf packages at Emerald Dunes and Trump International.

The atmosphere was brought to life through food and drinks created especially for the evening. Presenting Sponsor Ford’s Garage specializes in event catering and generously donated and prepared all of the passed hors d’oeuvres and dinner for the guests of the JustWorld Gala. JustWorld welcomed back Hospitality Sponsor Trophy Room, along with Wölffer Estate Vineyard, and Tito’s Vodka.

JustWorld was thrilled to continue partnerships with returning sponsors, including Presenting Sponsor Caryl Philips & Frank Zeiss, Palm Beach Masters, Voltaire Design, CaptiveOne, Horseware Ireland, and Mark Edward Partners Insurance. Longtime supporter, Voltaire Design, launched an initiative during the evening directly supporting literacy at the JustWorld partner organizations. For a small donation, guests were able to sign and donate a book to help symbolically fill the shelves of the JustWorld library. Also continuing their ongoing support, Horseware Ireland came back as sponsor of the photo booth, allowing guests to capture moments from what was a memorable night.

JustWorld deeply thanks sponsors, donors, volunteers, supporters and newcomers who came together to give children a brighter future.

If you were unable to attend the event and would like to make a donation to JustWorld to commemorate 17 years of bringing positive change to the lives of children around the world, your donations and inquiries can be sent to:

Give us a call: