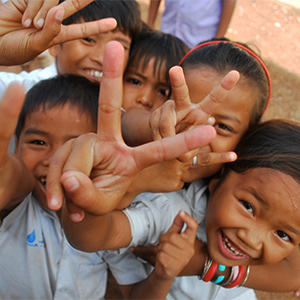 Yesterday, the worldwide leader in news, CNN, announced the Top 10 finalists for the CNN Heroes of 2014 award. Juan Pablo Romero Fuentes, the founder of Los Patojos, the JustWorld International partner project in Guatemala, has made a difference in the lives of over 1,000 children. Since its inception, CNN Heroes has received tens of thousands of submissions from more than 100 countries and profiled over 200 heroes, and out of all this year’s entries, Romero Fuentes was officially named a Top Ten Finalist. For being named a finalist by a CNN chosen committee, he receives a $25,000 grant. He is now in the running for a chance to win an additional $100,000 grant for his project, Los Patojos, which will be up to the general public to decide.   If you missed Juan Pablo Romero Fuentes’ CNN Heroes segment, check it out here!   The CNN Heroes are every day people who make an extraordinary difference. The 23-year-old Guatemalan native has forever changed the lives of children in the community he serves and continues to do so every day. He converted his family’s home into a safe haven for children, which offers a shelter away from the everyday street violence and illegal activities that have plagued the country. Los Patojos, supported by JustWorld International, provides education, nutrition, health and hygiene, as well as leadership and cultural development programs for children and young adults, aged four to eighteen. It gives them hope by giving them access to knowledge in a safe environment that promotes learning, growth, and development in a positive way.   “It has been CNN’s great honor for the past eight years to shine a spotlight on these remarkable individuals who are making a difference in their communities and the world,” said Jeff Zucker, President of CNN Worldwide. “We are proud to provide a platform for these heroes to share their stories and their important work with our global audiences.”   The network also announced that public online voting for the “CNN Hero of the Year” opened yesterday, October 2nd, and will run through Sunday, November 16th, at midnight PST. Voters can log on to CNNHeroes.com to cast ballots for their favorite Hero once a day, every day. Social media users can also share their votes on Facebook and Twitter.   Peabody Award-winning and Emmy-nominated, CNN Heroes: An All-Star Tribute, will air on Sunday, December 7th, at 8:00pm ET on CNN U.S. It will also be simulcast on CNN International and CNN en Español. Hosted by Anderson Cooper, the tribute will honor individuals who are making extraordinary contributions to help improve the lives of others.   This year, CNN continues its collaboration with the Annenberg Foundation, a leading supporter of nonprofits worldwide. As part of the prize package, the Annenberg Foundation will provideall of the 2014 Top 10 Heroesfree organizational training through a customized version of the Annenberg Alchemy program.  Alchemy offers practical guidance for nonprofit leaders in fundraising, communications, management of volunteers and strategies to build and keep a strong board of directors.   For the latest information about the Top 10 CNN Heroes, viewers and online users are encouraged to visit CNN Heroes on Facebook, follow @CNNHeroes on Twitter and use the hashtag #CNNHeroes. Additionally, behind-the-scenes CNN Heroes images can be viewed on CNN Heroes’ Instagram account.   About The Annenberg Foundation   The Annenberg Foundation is a family foundation that provides funding and support to nonprofit organizations in the United States and globally. Since 1989, it has generously funded programs in education and youth development; arts, culture and humanities; civic and community life; health and human services; and animal services and the environment. In addition, the Foundation and its Board of Directors are directly involved in the community with several projects that expand and complement its grant support to nonprofits.  Among them are Annenberg Alchemy, Learner.org, Annenberg Space for Photography, Explore, GRoW and the Metabolic Studio.  The Annenberg Foundation exists to advance public well-being through improved communication. As the principal means of achieving this goal, the Foundation encourages the development of more effective ways to share ideas and knowledge.   About CNN Worldwide   CNN Worldwide, a division of Turner Broadcasting System, Inc., a Time Warner Company, is the most trusted source for news and information. Its reach extends to nine cable and satellite television networks; one private place-based network; two radio networks; wireless devices around the world; CNN Digital Network, the No. 1 network of news Web sites in the United States; CNN Newsource, the world’s most extensively syndicated news service; and strategic international partnerships within both television and the digital media. For more information, visit www.CNNPressroom.com.   To donate to Los Patojos, the JustWorld Guatemala Project Partner, please visit www.justworldinternational.org. The Samuel-Sanford Family of Canada is matching all new donations to the project up to a maximum of $100,000. By donating now, you will actually double your gift and benefit JustWorld in raising funds to build a school for Los Patojos that will allow for the alternative education program to double their capacity, expand programming and increase sustainability through fund-generating activities. Every dollar makes a difference, especially when it is doubled in the Los Patojos Project Completion Challenge!   About JustWorld International   JustWorld International is a not-for-profit, humanitarian organization that funds life-changing education, nutrition, health and hygiene, and leadership and cultural development programs for impoverished children in Cambodia, Honduras, Guatemala, and Colombia.   JustWorld International is a 501(c)(3) charitable organization in the United States and a registered Association 1901 in France. Tax-deductible donations are accepted in Switzerland and JustWorld’s supporters may send their donations to Fondation Philanthropia, a Swiss public-benefit umbrella foundation. Tax-deductible donations are also accepted in Canada. Canadian donors please visit: https://tidescanada.org/support/justworld-international-fund/. JustWorld International has no political or religious affiliation.